I wasn't sure even last night of May, if I participate or not, but in a morning I was up at 5am and ready to go, and I'm glad I did.

First day is always fun, each seen bird is countable to your list; it's like a January first birding day. I started at Fort George Island with 19 species, moved to Huguenot Park and got another 22 species. After Huguenot I drove to M&M Dairy. This place gave me really boost with Black-bellied Whistling Duck at back pond, and singing Orchard Oriole by the road. 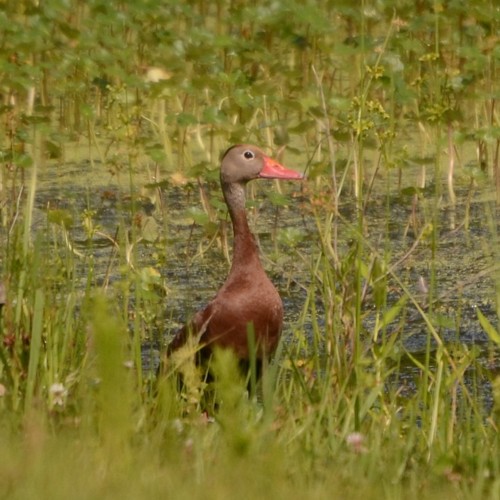 The next day I visited Reddy Point Preserve and Blue Cyprus Park. At Reddie Point I found that one Ovenbird is still here, singing actively. Since you can't count the bird for June Challenge, if you haven't seen the bird, then I had to find her. After playing a tape bird showed up for a moment, just to check out who came, and vanished back into bushes. That's all I needed - check mark!

First week of the June was easy, bird list grow rapidly, but after that it got harder and harder to find new birds for my growing list. By the middle of the month I reached to one hundred species. It's not easy after that. Days went by without anything new. You really have to go after each individual species to get them to the list, like Wild Turkeys near airport and Bobwhites at Pumpkin Hill.

I knew that Bobwhites are always at Pumpkin Hill, but park was closed after wildfire. I went there anyway and heard Bobwhites calling. I thought there is no way I can get them on my list, because you have to see them to count them in June Challenge. Just in case I scanned the area with binoculars and wow, one was up on a distant tree, I managed to snap even photo. 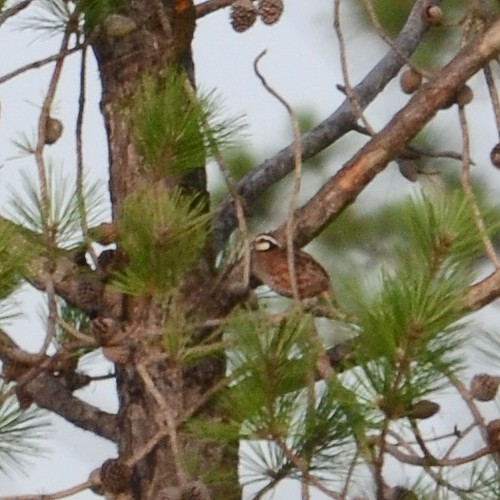 Newly opened Sheffield Park at New Berlin Road is a good place for birding. Back of the park is covered with blackberry bushes, which attracts Buntings and Orioles. I found nesting Blue Grosbeak and Indigo Bunting, also both Orchard Oriols, male and female. I'm sure they nest there. I think Eastern Kingbirds nest there also, I saw family of 4-5 birds. I heard even Bobwhites calling in a park, so it's a great place.

At New World Avenue I found pair of Sandhill Cranes. They were hanging around by the road with a little chick behind. This should be the first reported nesting in Duval County. I was really glad to see them, since it is also my year bird. So far I have seen Cranes in Duval County only by flyover, glad to see them up-close. 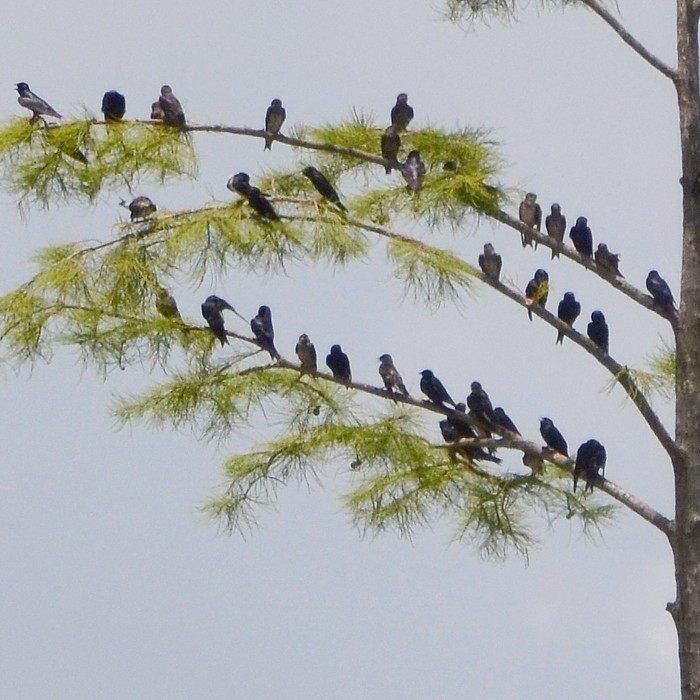 End of the month got really busy. By June 29th I repeated the previous record 116, set last year by Mr. and Mrs. Beckers. I happened to see them at Huguenot and told that I just got up to 116. They were kind enough to invite me to their backyard to get my still missing hummingbird and brake their own record.

We were all sitting on a back ports and waiting to hummingbird to show up. After a little while Humming flow to the feeder, but speeded away before I was able to take a picture. After a moment he returned, landed on a tree limb, and was looking who's that new guy there. I'm glad I was able to get a picture.

After Beckers house I went to Paddle Creek Preserve at Jacksonville Beach to look for Red-tailed Hawk, which was still missing from my list. There were many Ospreys around. I saw three Osprey nests but no sight of Red-tails. It would be perfect place to see them on a sky, so I decided to sit down and just wait to see if they show up. After 20-30 minutes one of them flow over my head and I snapped quick pictures, but didn't get a good one, so I waited longer and other one started to circle in a sky. Glad I waited.

Last day of June, I was at Black Hummock Island to look for a Seaside Sparrow, but no luck with that. Also I missed the Least Bittern at Hanna Park and few more species like Lesser Back-backed Gull, Whimbrel and Meadowlark, but I leave those for next time. I'm very happy with the result I got, 119! This is a new record for Duval County June Challenge. Check out also my June Challenge Photo Gallery 2013.