BIRDING IN DUVAL COUNTY & BEYOND 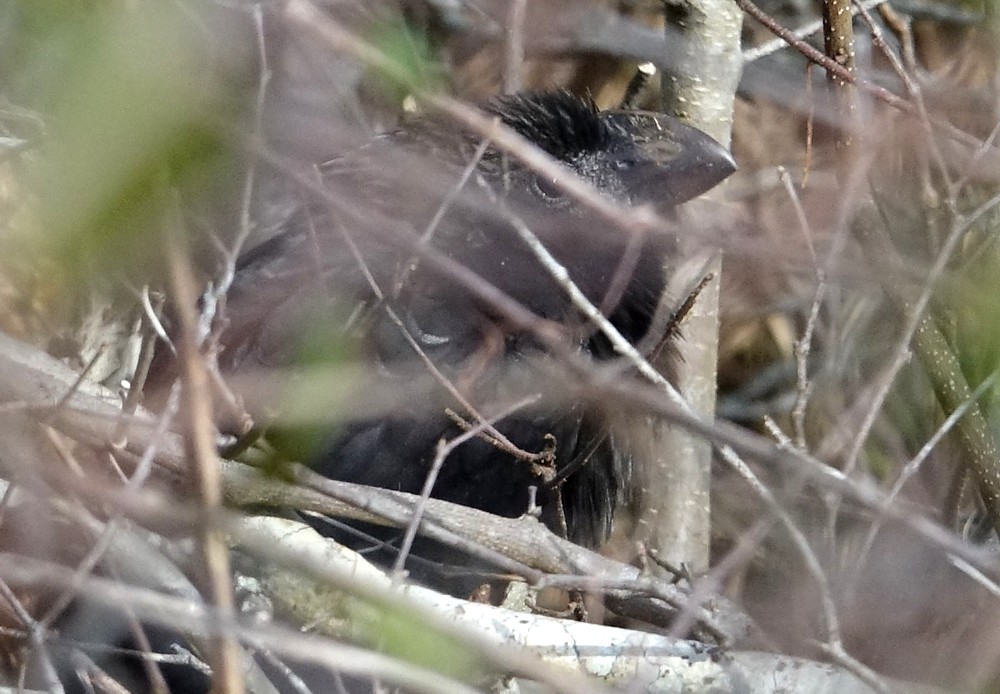 December 6, 2018
Smooth-billed Ani showed up in Little Talbot Island. I tried to relocate the bird the next day but couldn't find it. I went back this morning and luckily found it. Ani was well hidden in shrubs. The only reason why I saw it was that I noticed the movement. Extremely hard to see it even if you know where it is. Bird did not move much, was sitting there quietly. There is only one previous Smooth-billed Ani report in Duval County in eBird, from 1966 - 52 years ago! 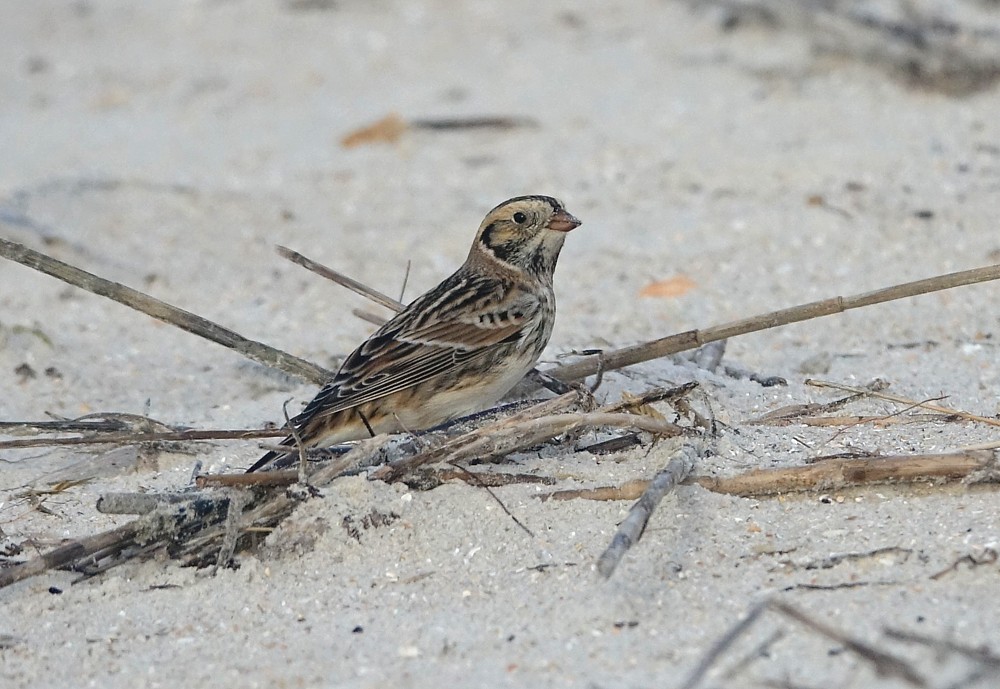 November 25, 2018
I went to see Lapland Longspur in Huguenot Park this afternoon. Kevin Dailey found this rare bird and a lifer for me yesterday. I met there Reinhard Greisler from Orlando. He's been out there since early morning and walked around many hours and saw the bird already. But he was still looking for the Snow Bunting which was seen there also. We started to walk together and saw the Longspur couple of times at flight. Then it came and dropped down right front of us. We got amazing views and took hundreds of photos till we finally just left him there feeding in dunes. 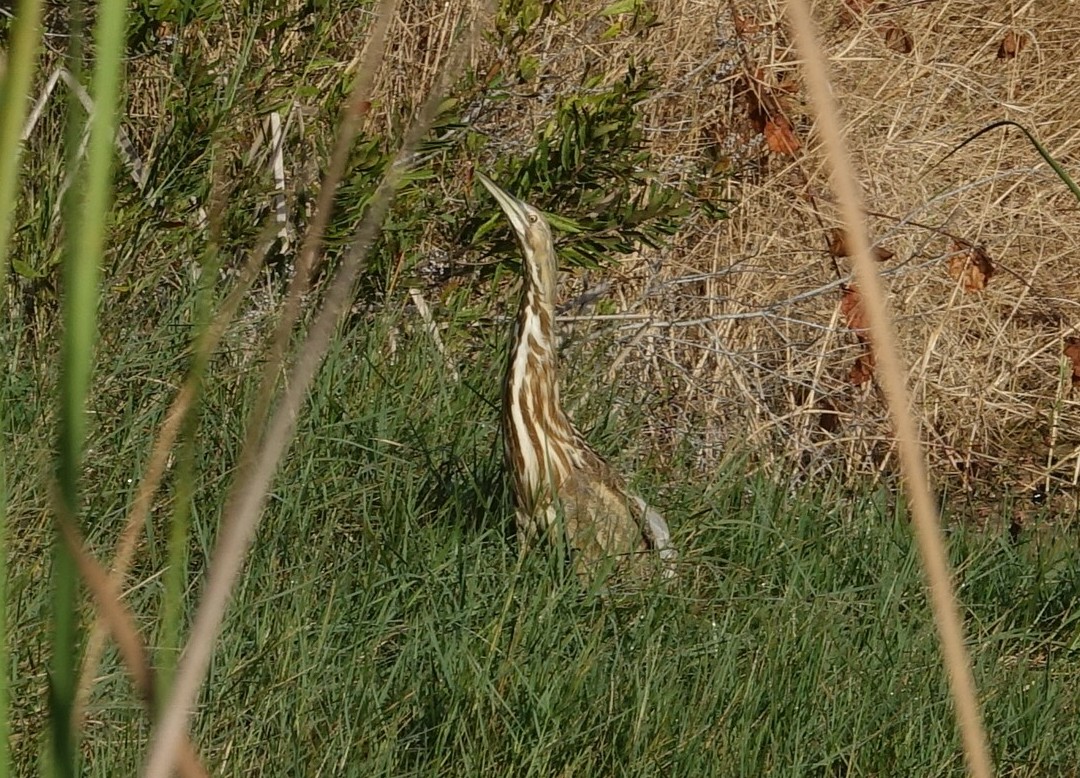 November 11, 2018
American Bittern is back in Sheffield Park. They show up there almost every winter. The bird was by the middle pond but took off, luckily I found it later by the front lake and got some decent pictures. This morning I went to Hanna Park. Migration is almost over, but I still managed to see some migratory warblers, American Redstart, Blackpoll Warbler, and Cape May Warbler. We are about to get an exciting time of year in North Florida; the ducks and sparrows are coming! 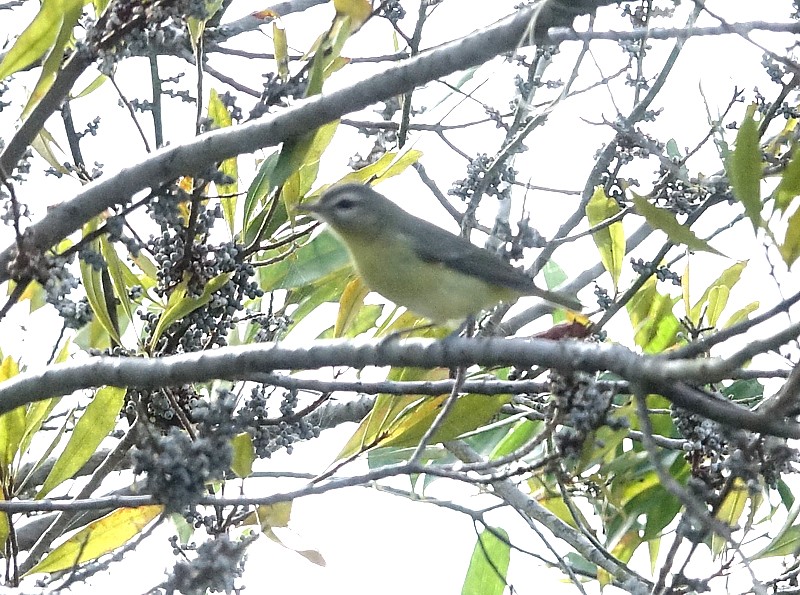 October 22, 2018
When I got into Hanna Park, I didn't expect to see too many birds this morning. It was windy, and birds like to stay hidden on a windy day, but this morning happened to be as one of the best of the season. Birds were everywhere. I saw 60+ species, including 14 warbler species, two new year birds and a lifer. New year birds were Bay-breasted Warbler and Black-throated Green Warbler, and lifer was a Philadelphia Vireo. I have never seen that species before, so it took a little while to make sure it's not equally rare Warbling Vireo instead. 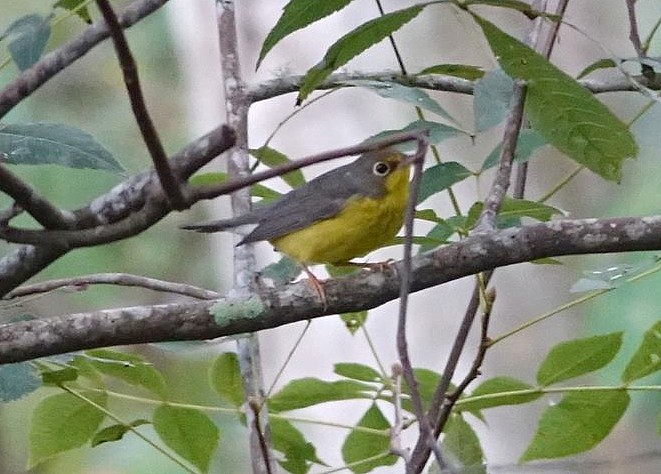 October 16, 2018
Rare birds are showing up in this fall migration season. I had rare Canada Warbler and an Alder Flycatcher in Hanna Park beginning of the month. Also a Golden-winged Warbler at Reddie Point a few days later. First cooler morning brought lots of birds into Reddie Point. A few days ago I had 64 species in a morning at Reddie Point, including nine! Rose-breasted Grosbeaks. Other good birds I have seen lately: Magnolia Warblers, Tennessee Warblers, Chestnut-sided Warblers, and one Pectoral Sandpiper at Heritage road wetlands. 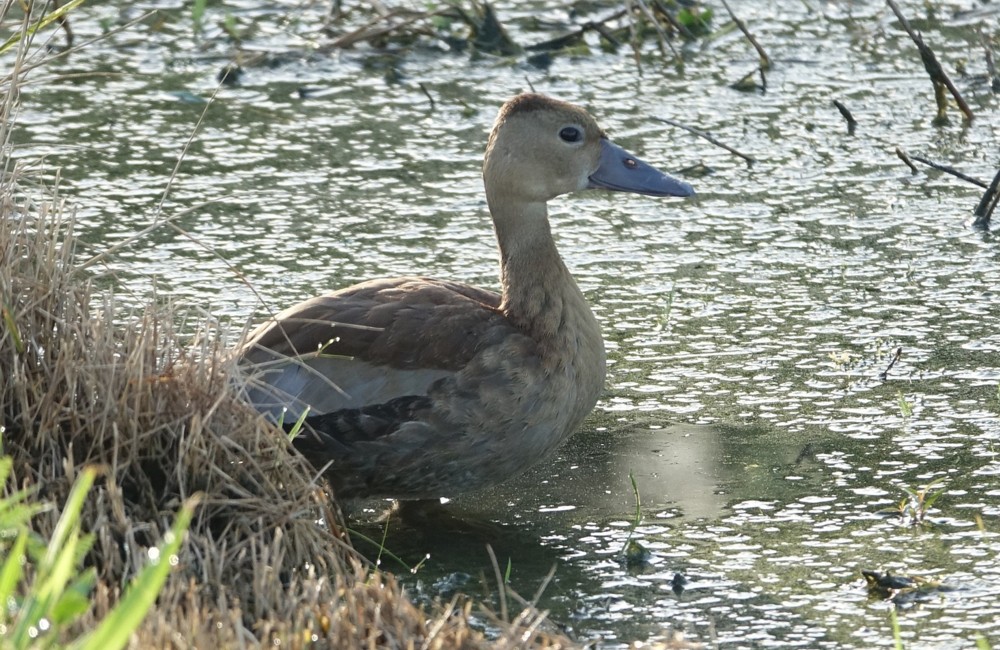 September 22, 2018
Fall migration is picking up. Yesterday I saw rare Blue-winged Warbler at Theodore Roosevelt parking lot trees, and this morning I had Chestnut-sided Warbler in Sheffield Park and juvenile, Black-bellied Whistling Duck at the M&M pond. Other latest highlight was a Baltimore Oriole at Reddie Point a couple of days ago. Every day brings more migratory warblers to our area. 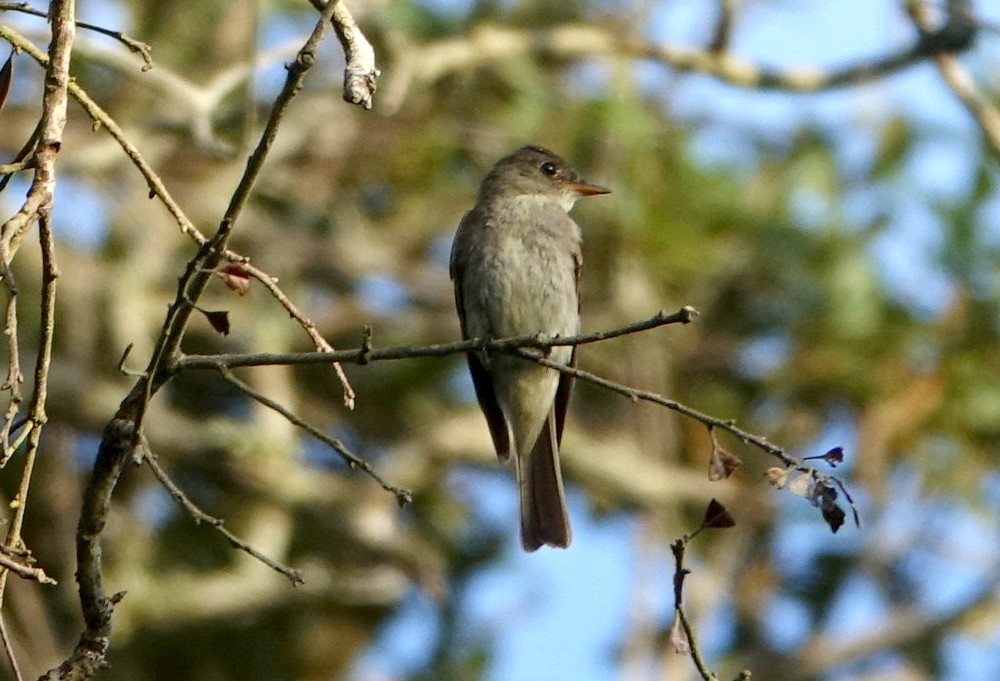 September 14, 2018
Eastern Wood-pewee was a highlight this morning at Fort George Island. Other good birds were Eastern Kingbird, Yellow-throated Vireo, and female Blue Grosbeak. Ribault Club area is excellent for migratory warblers and shorebirds. Today I also saw a Whimbrel, Black-bellied Plovers, Least Sandpipers, Willets and lots of White Ibises along with typical egrets and herons on an open field. 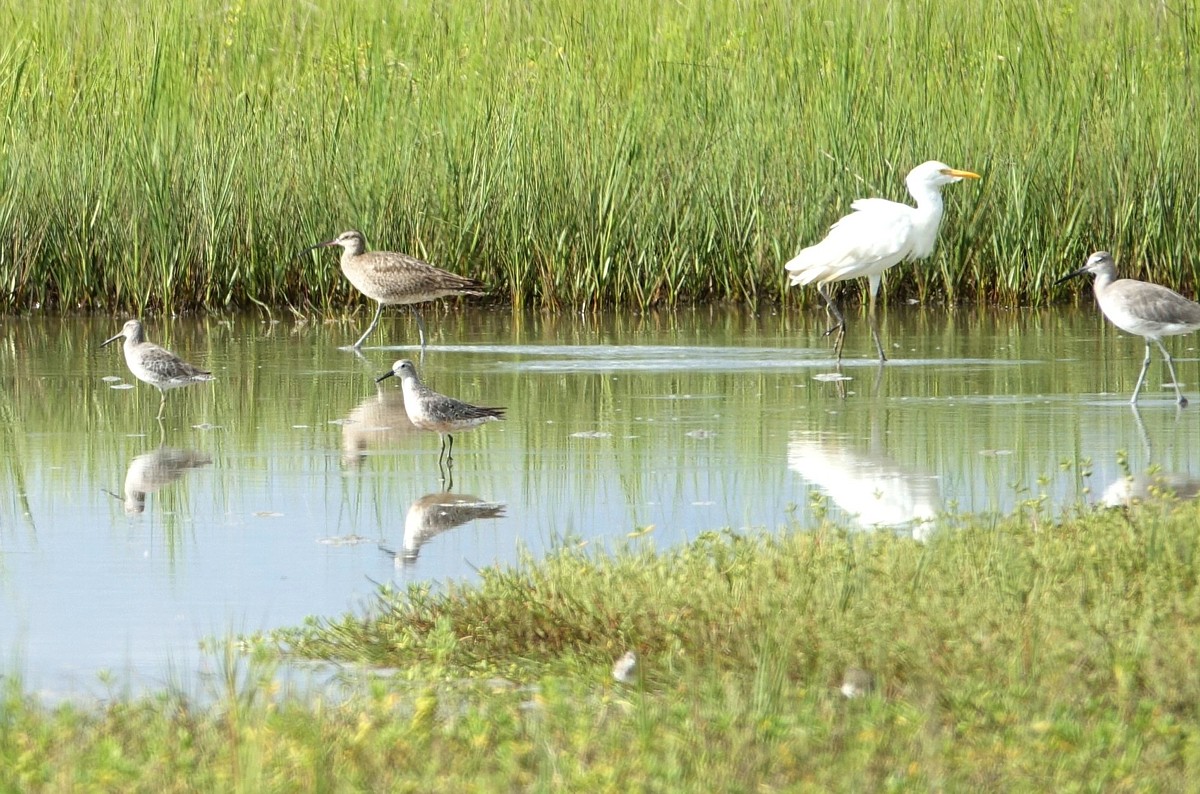 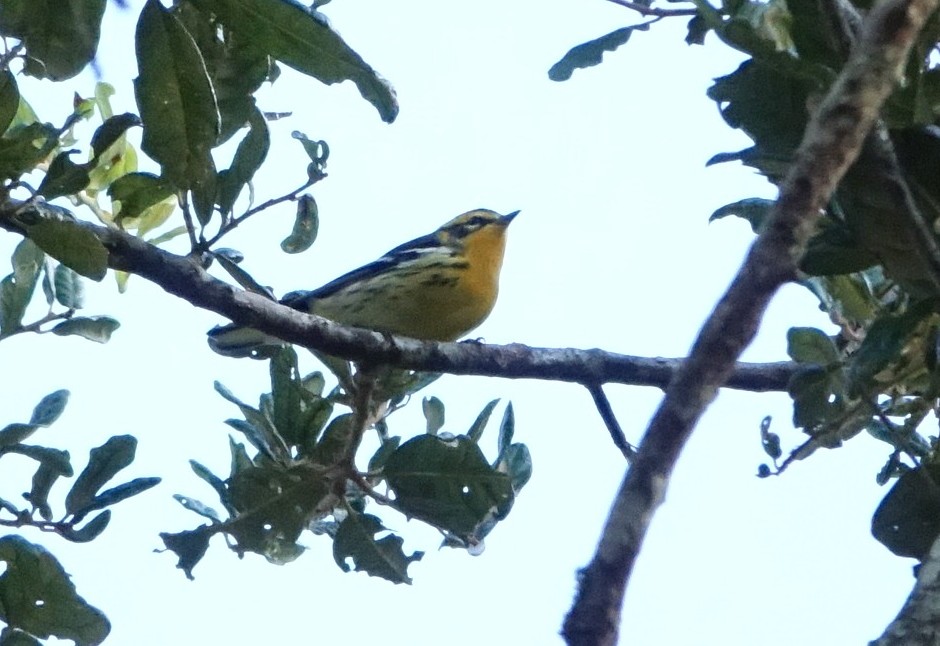 September 8, 2018
An excellent birding at Fort George Island this morning. Red Knot and Blackburnian Warbler were highlights of the day. A flooded field behind the Ribault Club attracts lots of shorebirds.

September 4, 2018
Warbler migration is picking up. The highlight was a Hooded Warbler in Jacksonville Arboretum. American Redstarts and Prairie Warblers are now pretty common. Two Yellow Warblers in Reddie Point yesterday. First Ovenbird and Worm-eating Warbler at Theodore Roosevelt Area today. Can't wait for the weather to cool down to get migration going. 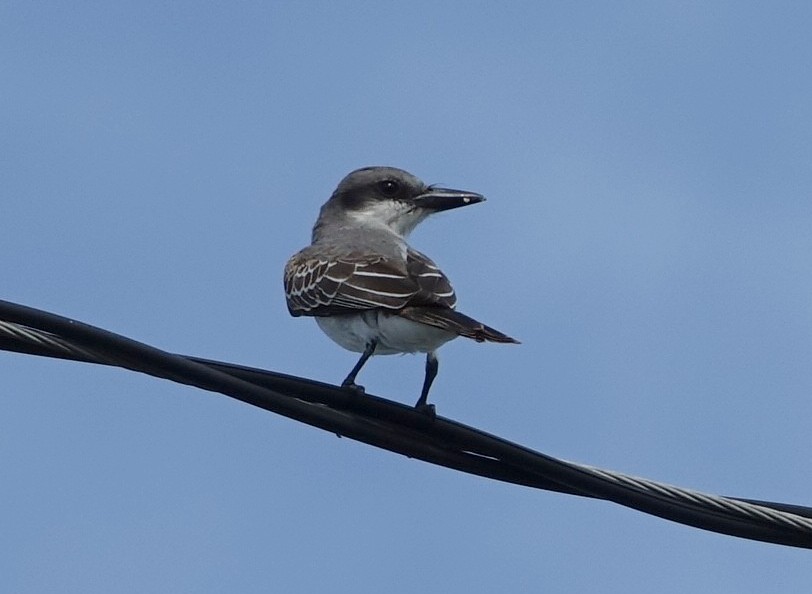 August 23, 2018
Two Sandhill Cranes were by the New World Avenue just were they supposed to be.

August 21, 2018
I saw Gray Kingbird at Mayport Village. One flew onto the fire and took off right away. Other one followed the same path.

July 31, 2018
New county yearbird Black Tern at Huguenot Park this morning. Still looking for my first Common Tern for this year. Fall season is just starting, so no worries.

July 22, 2018
Couple of new warblers for the fall season showed up at Reddie Point this morning: American Redstart and Black-and-White Warbler.

July 20, 2018
Summer can be very slow for birding, but this morning I saw flock of 14 Glossy Ibises at Jim King's park, they are pretty rare here. At Heritage Road Wetlands I had my first Prairie Warbler for the season. Fall birding season starting to pick up slowly.

I was birding in Hanna Park this morning, highlights were two Least Bitterns and Mississippi Kite. Check out a short video from this morning. - June 25, 2018

Spring warblers migration is still active. I had Northern Waterthrush, Blackpoll Warblers, American Redstarts at Theodore Roosevelt Area. Also at Spoonbill Pond has now rare White-rumped Sandpiper mixed in with lots of Semipalmated Sandpipers and other shorbirds. - May 13, 2018

I was birding at Seaton Creek Preserve this morning. Hooded Warblers singing all over and Acadian Flycatcher is back on its territory. View checklist for photos and video. - April 28, 2018

Wood Trush, Ovenbird and Veery all together on a trail at Theodore Roosevelt Area. - April 21, 2018

Spring migration is on full swing, next three weeks going to be busiest. These birds below are the latest. - April 9, 2018

I saw American Avocets at Betz Tiger Point. I got lucky to see them because Avocets were just taking off from distant mudflat as I arrived. - April 3, 2018

I was leading Audubon field trip this morning at Sheffield Park and found an American Bittern. - March 25, 2018

Swallow-tailed Kites are back in Fort Carolina neigborhood, saw 2 of them this morning. - March 15, 2018

Went with Mike and Tom to Julington-Durbin Preserve to see our target bird Bachman's Sparrow, they were singing all over the preserve. - Febr 25, 2018

Good birding at Fort George Island and Little Talbot Island this morning. Found both of my target birds: Field Sparrow and White-crowned Sparrow. Later at night I had also a Rusty Blackbird singing at Spanish Pond. - Febr 24, 2018

Foggy and quiet morning with lots of bugs, a perfect weather to see the marsh sparrows at Theodore Roosevelt Area. Saw all three species: Nelson's Sparrows, Saltmarsh Sparrows, Seaside Sparrows. Also I had my first Northern Parula for this season. - Febr 19, 2018

I did some seawatching at Little Talbot Island. Ocean was calm, I happen to see Red-throated Loon, actually two of them. Last year I missed them completely. - Febr 5, 2018

My annual BIG FIRST DAY ended with 104 species seen or heard. Normally I do it on January 1'st but the weather was not cooperating sooner. View checklist. - January 7, 2018